This is my story. 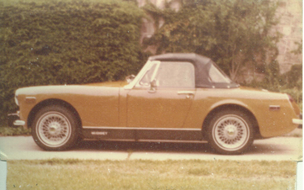 I fell in love with British sports cars when on a vacation in Illinois with my parents in 1965. A friend of the family invited me to go with him to run an errand in his Bugeye Sprite. The top was down, the wind was in my hair, and the ride incredibly fun. I was 9 years old and permanently hooked!

Before I was able to drive, one of my classmates in high school came to school driving a 1965 Austin Healey Sprite. It was painted purple and pink with airbrushed yellow and green designs on it. We called it the Easter Egg car. Though it looked crazy, when he was ready to sell his AH, I wanted to buy it. And I would have but just before we made the sale it started some rod knock. When we checked the oil it was thick and white like paint. So that one wasn’t for me.

I decided to go to a dealer and try to buy one off the lot. They had several MGB’s and one MG Midget. I looked at a B, but couldn’t afford it. So I decided to “settle” for the new Midget. I paid $3150 in 1974. The color was called Bracken.

That little car and I went everywhere together. First dates, the wedding of my best friend, my first full-time job (a brick and block layer… everyone else drove pickup trucks), induction into the Air Force in 1975, my first wreck (I rolled it upside down in a ditch that was half full of water and mud), and numerous trips to my home in Pennsylvania from Shaw AFB, SC. My longest trips were from Lemoyne, PA to Albuquerque, NM in Jan. 1977 and then from Albuquerque back to Shaw AFB near Sumter, SC. Along the way, over those years, I learned about engines and what made them tick. And even better yet, what held them together. I took the engine apart and put it all back together just to do it. I remember pulling the engine and transmission out together, once, without an engine hoist. Just 2 of my friends and I; we jacked the rear of the car up as high as we could get it, then one lifted the front of the engine, the other two lifted from the sides at the rear of the engine.

In the Spring of 1977, I fell in love with a 1975 Triumph TR6 and traded my Midget for it. It was fast, powerful, and fun. But then life happened. I got married and then found that I needed to downsize to get my budget under control. So I sold the TR6 and paid off the wife’s car and fixed up an old Plymouth Valiant for a second car. I worked in construction with my dad, sold life insurance, worked my way through Bible college working at a prison. After the kids were out on their own and I neared retirement (within 7 years) from the Illinois prison system I began to look for a hobby. I had lots of interests; woodworking, remodeling, landscaping and of course my first love, mechanics. I drove by an auction yard near my home in Greenup, IL and saw a lonely 1978 Midget sitting by itself on the lot. It hadn’t sold because the owner didn’t have a title in hand. They had had to order a duplicate from the DMV. After a little dickering with the owner and after hearing it run, though not very well, I trailer it home for $1300. I had paid too much.

It took over a month to get all the electrical bugs worked out and another month to get the engine running. Even after it was running it was obvious it was tired. I started driving it to work everyday. On the way home one night it lost some power and started running hotter than usual. The next day I did a compression test on all cylinders and found that #4 barely registered 25 lbs. It was time for the overhaul. When I got it on the engine stand and got to where I could pull the pistons I found that the rings on the #4 piston were gone, literally gone. Most of the lands were gone as well. And the piston top had deep gouges in it. I’m not sure where the rings went. They must have broken into pieces and gone out the exhaust because I never found a trace of them.

I gave the engine what I would call a complete over haul. I took the block, head, and crankshaft to the machine shop. I had to use 2 different machine shops as one doesn’t have a grinding wheel small enough for the 1500 journals and the machine shop that could grind the crank didn’t do cylinder bores. Between the two shops I got the job done. They bored the cylinders to .030 over and the crank to .030 under. They align-bored the main bearing journals, and resized the big ends of the connecting rods. We pressed in new small end bearings and resized them. The block and head were magnafluxed for cracks. It got a new set of flat topped .030 over pistons and rings. The cam bearing surfaces were still good but it got a new OEM cam. And the crank was balanced. They took .003 off the deck and .005 off the head. The head received new guides, valves, and springs. The rockers were removed, inspected and since the shaft showed wear it got a new rocker shaft. Lastly it received a new timing chain, thrust washers and oil pump. I washed it, blew and brushed out the oil galleries and painted it up.

After I got it back together and in the car, it fired right up. The oil pressure was a little better than 70 lbs. when it was warm. The water temperature held steady at 175 degrees. That was in 2007. I drove it daily 100 miles round trip to work and back until I retired in July of 2013. I averaged 25,000 miles a year for almost 6 years. I had put almost 150,000 miles on that rebuild and it was still running well when I sold the car for $3200 that same year.

In 2010 I bought a 2nd 1978 that was torn apart and in boxes. While I was driving Midget #1 I started working on Midget #2. I got it running and back on the road just before I retired from corrections in 2013. At first, I used Midget #2 to test run all of my engine rebuilds and had a motto that I would not let you run one of my rebuilds in your car until I have proved it in mine. I can no longer do this because it became very time consuming, labor intensive and of course the 1500 was the only engine I could test this way. Now I use a test stand I built just for this purpose and can test a variety of engines.

JMAC ENGINE SHOP
As I approached time to retire (2012), I began thinking of what I would do when I retired. I wanted to stay active and was too young, at 57, to think of sitting around and watching soap operas. As I was looking for a hobby I decided to see if I would get much work if I rebuilt these British car engines. I had two 1500 cores sitting in a corner of my shop, begging to be rebuilt. Well, that's where JMAC Engine Shop got started. I rebuilt those two engines in 2012 and sold them after a few months; I got a core engine from each of them. For the first couple of years I only rebuilt and sold 2 to 4 engines; and that was fine, it was supposed to be a hobby after all. In 2019, the number was up to 8. In 2020 I rebuilt 10 engines; 2021, 17. Besides Spitfire 1500's, I have been getting a variety of other engines to rebuild; a couple of Midget 1275's, an MGB 1800, an MGA 1500 that I turned into a 1622, a couple of TR-4 engines, a GT-6 engine and an MG-TF engine. Though I enjoyed rebuilding those engines, it has been getting a little crazy learning the idiosyncrasies of each engine type. I feel like I can't be as good with all of them as I have been with the Spitfire 1500. As of January of this year, 2022, I have decided to focus on the Spitfire/Midget 1500, Spitfire 1296, the GT-6 and the TR-6 engines; they are all very similar in design, using many of the same parts. My goal is to continue to rebuild these engines and keep the rebuilds affordable to help British car enthusiasts keep their cool cars on the road for as long as I am able.